The feminist vision of matriarchy we can see in blurb for the book:  “Societies of Peace: Matriarchies Past Present and Future” edited by Heide Goettner-Abendroth. -

“Matriarchal societies, primarily shaped by women, have a non-violent social order in which all living creatures are respected without the exploitation of humans, animals, or nature. They are well-balanced and peaceful societies in which domination is unknown and all beings are treated equally.”

This is in total contrast to femdom’s vision of matriarchy which is about very cruel and sadistic women abusing men and treating them like slaves.  The contrast couldn't be greater.  So who is right?  Or is there a middle way in this?

This then is the weakness of any concept of a peaceful, non-violent matriarchy.  It can only survive, if it is not invaded by patriarchy.  This means it can only endure in isolated communities, or on land no patriarchal rulers or wealthy businessmen wants.  It also must not pose a threat to the existing patriarchal elite, by showing to the world a better way of living.  This then is the problem.  For matriarchy to thrive, it has to be strong enough to defend itself from attack from patriarchy.

Because of this, does it mean that the female leaders of any matriarchal society have to be as aggressive and warlike as the leaders of patriarchal societies?  They may not have to go to this extreme, but they certainly need be willing to defend themselves.  This means, having a well train military force with all the latest weapons.  The very fact that matriarchy has to do this, undermines the idea of a peaceful, non-violent community.

Sexual equality has been the bedrock of feminism and this concept is so popular with women that we also find it in ideas about matriarchy.  The problem is with this is that if a society is ruled by women, then how can you have sexual equality?  If you had a society ruled by both men and women that would be an egalitarian society but is that a matriarchy?

Though it has to be admitted, that because women do like the idea of equality, a matriarchy would be far more equal than any patriarchal society.  A truly equal society might be possible in a society of only women but if we have a community of both sexes, then men will undermine any attempts to bring about an egalitarian society.

The problem is that although women very much like the idea of sexual equality, men are not so enthusiastic.  We can see this clearly in all male dominated societies that are very unequal.  Even when men set out with a clear intention to create an equal society like in the French and Russian revolutions, they failed completely.  So why is this?

The big problem that men have with equality is that they are very competitive with each other. Competition and equality are like oil and water and cannot mix.  This is because competition is all about winning and losing and winners can never be equal to losers.

We can see this in nature where most male animals fight and compete with each other for access to females.  The prime example of this, are stags that fight each other every year, where winner of these encounters ends up with a harem of females and the losers get nothing.  Although men don’t do this, they still instinctively compete against each other and enjoy competitive games like sport and even war.

Women are far less competitive than men and like the idea of equality.  The reason for this, is they give birth to children.  Childbirth is a dangerous business and women have a far better chance of survival for herself and her children if she has the help and support of other women.  So competing against other women is not a good idea for any mother if they need the assistance of other women.

Women are also far more powerful if they support and work together when dealing with men.  We can see their clearly when we compare the chimpanzee with the bonobo.  (Both apes are genetically, our closest relation in the animal world.)

Chimpanzees live in very male dominated communities where male chimps use their greater size to intimidate females and force them into submission.  This doesn’t happen in bonobo communities where the females form a powerful sisterhood and defend each other against male aggression.

It seems, female chimpanzees pay a heavy price for not giving assistance to each other.  As they find themselves alone when facing large and aggressive male chimpanzees, who use violence to impose their will onto any female.  This doesn’t happen with bonobos where if a male bonobo attempts to use force against a female, every bonobo female within hearing distant will immediately come to her rescue.  Driving the male away and giving him a good beating in the process.

So equality and sisterhood makes perfect sense to women because they know instinctively, that is how they become powerful.  The problem for feminists is that this power only comes about with equality between women and not between the sexes.  Feminine power comes from a strong sisterhood that support each other against male aggression.

So what do males think about this?  The only men that would object to a powerful sisterhood ruling societies are alpha males.  It makes little difference to ordinary men because they are oppressed by a ruling elite anyway.  So it makes little difference to them who is ruling society, as their position in society doesn’t change.  They might even be better off if women rule the world instead of alpha males, because women are far more caring people.

Likewise the feminist version of matriarchy where the sexes are equal also has its problems.  Because as we see today, when we have governments of both males and females, then women have to compete against aggressive alpha males for power.  Female politicians then find themselves having to act and behave like alpha males if they are going to achieve any position of power.  Again, only a small minority of women want to do this.

In spite of what feminism claim, we have to recognize that the sexes are very different.  Yes, there are many masculine women and feminine men but the average man and woman are different in many ways.  And because of this, a world ruled by women would be very different to one ruled by men.

A truly matriarchal world probably wouldn't be able to eliminate warfare, violence or inequality from our world, but would do a far better job at doing this than any patriarchal society.  So the vision put forward in the book, “Societies of Peace: Matriarchies Past Present and Future” could be partly right. 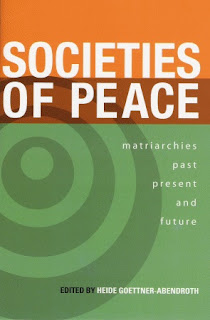 There is one aspect of feminism that seems to be forgotten and that is the idea that, “the sisterhood is powerful”.  Women can learn a lot from the bonobo ape and form powerful sisterhood to combat male violence and aggression.  It would be far better for feminism to go down this road, than lone females competing against alpha males for power in business and politics. 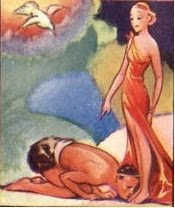